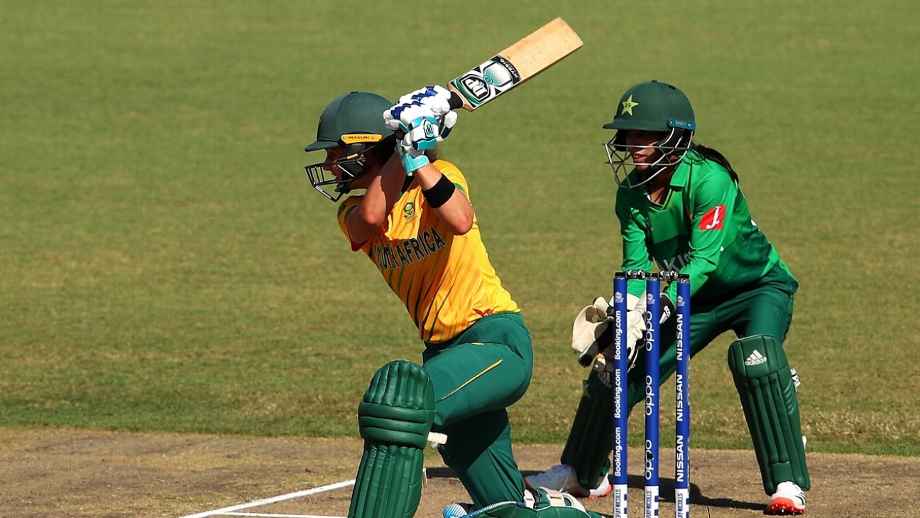 Laura Wolvaardt produced one of the innings of the tournament as South Africa rebounded from a tricky start against Pakistan to book their spot in the semi-finals. Wolvaardt struck a 36-ball half-century that lifted a stuttering inning into a total that proved too much for Pakistan who was missing captain Bismah Maroof after she was ruled out of the tournament with a finger injury.

Pakistan had made the early running through another impressive new-ball spell from Diana Baig and for much of the innings it appeared South Africa would struggle to make 120, but Wolvaardt changed all that as she struck 33 off her last 15 deliveries with 29 runs coming off the last two overs.

South Africa defended the total without the services of Marizanne Kapp, who missed the Thailand match with a respiratory infection and struggled after her innings on a warm day, as the remaining bowlers, led by Shabnim Ismail, applied consistent pressure to Pakistan's top order which proved too much to handle.

Baig does it again

Baig set the tone for Pakistan's victory against West Indies and she produced a similarly demanding spell here. The dangerous Lizelle Lee, who scored a century against Thailand, fell in the opening over when she edged an outswinger and in her third over - which became a wicket maiden - Baig had Dane van Niekerk dragging on. She thought she had removed van Niekerk in her previous over when the South Africa captain was given lbw, but the DRS showed the ball just missing leg stump. Not than van Niekerk had been especially confident of it being overturned - she was halfway off the ground before the ball-tracking confirmed her reprieve. Not that it lasted long. Baig's opening spell finished with 3-1-13-2.

Wolvaardt's T20I career has not taken off in the way her ODI form has - where she averages 45 - and she has been handed a new role in the middle order for this tournament. Today's innings may come to be viewed as a breakout moment for her. South Africa were 54 for 3 at the halfway mark when she walked in, and soon 64 for 4 when Kapp departed, and in desperate need of a strong second half. Woolvaardt produced a wonderfully measured inning, running hard - something not always seen in this tournament - and then finishing with a blaze of boundaries as she struck five of her last six deliveries for four. The crispness and power of her driving were outstanding, strong wrists enabling her to find gaps between and over fielders.

Without Kapp, even more, the onus fell on Ismail and she responded with a two-over new-ball spell that put Pakistan on the back foot. She conceded just two runs off the bat and her second over was a wicket maiden when she induced Muneeba Ali to splice a pull to mid-on. Pakistan did not help themselves with some poor running which brought the wicket of Umaima Sohail who hit the ball straight to cover and set off immediately, on for Javeria Khan to not move an inch.

Though Pakistan was behind the required rate, Javeria started to play some strong drives to suggest that South Africa may struggle in the absence of Kapp. Wanting a sixth bowler, van Niekerk turned to Chloe Tryon, who is a rarely used option these days, and her first delivery was dispatched down the ground. However, four balls later came the moment that all-but decided the game when Aliya Riaz drove a delivery firmly back down the pitch, it clipped Tyron's fingers and ricocheted into the non-striker's stumps with Javeria forlornly short of her crease.

South Africa celebrated their moment of fortune, Javeria walked off with her team's chances done although brave hitting from Riaz and Iram Javed hinted at what might have been. Pakistan has shown improvement in this tournament but barring a mathematical miracle will again exit in the group stage.

A character sketch of Uriah Heep

What did Sun and Moon see in the refrigerator

David Copperfield is a great work of child Psychology

Welcome
Page under maintenance, Thanks for visiting